North Londoner Esther Elliott was diagnosed with keratoconus by an optician when she was a child and has struggled with her sight ever since.

Her keratoconus– a condition which produces a cone like progressive bulge of the cornea and restricts vison - was always extremely severe in her right eye. At 13, after losing her vision completely in that eye, she underwent her first corneal transplant. 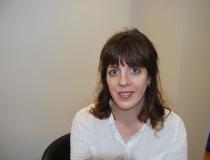 Twenty six years later her vision took another turn for the worse and this year Esther came to Moorfields for a second corneal transplant on the same eye - an operation made possible because of an eye donor.

Recalling how she felt when her vision started to deteriorate Esther said: “It was really tough because I lost so much vision in my right eye. I was trying to function with one eye not working at all and the other eye under a lot of pressure as I have the condition in that eye as well. The blurriness made me feel imprisoned within myself. I began to suffer from acute anxiety as I was trying to get around in my day to day life and getting really tiring and emotional.”

For the last 16 years, Esther has worked in the theatre until her sight started to go. “It deeply affected my ability to work in the way that I had done before. I lost an incredible amount of confidence, light sensitivity got worse and the ghosting of images increased. It became impossible for me to continue working which was really frustrating and saddening for me.”

Describing life after her corneal transplant Esther said: “Since the transplant I’ve slowly got more vision back in my right eye even though it’s only four months down the line. There’s still some light sensitivity but it's not as bad and because of that I’ve felt more confident in getting around places. I am looking forward to the chance of getting a contact lens fitted in the right eye now that it’s a better shape and hopefully will be able to see even more.”

Esther is only too aware that without the kindness of those who volunteer to be donors she would not have had her sight back and she has though of them often. It is a condition of donation that donors and their families remain anonymous: “I wrote to the Moorfields Lions Eye bank and asked them to pass on my letter of thanks to the donor‘s family to say how sorry I was for their loss, because I’m aware that my gain was at the expense of somebody else passing. I wanted to let them know how grateful I am and to say thank you - it’s such an overused word but I can’t think of a bigger word than that.

“Thank you for giving me this opportunity to take my life in another direction. Everything felt like it had come to a grinding halt. I felt really lost. Trapped in myself. I am aware that this is a real gift."

Moorfields Eye Hospital urgently needs more donors. If you would be interested in finding out more about donation or wish to leave your own special legacy of sight to help people like Esther, please support Moorfields YES EYE CAN campaign. Visit http://www.moorfields.nhs.uk/yeseyecan for more information on how to become an eye donor or call the Moorfields Lions Eye bank team on 020 7253 1199.

Esther says: “If you could just bear in mind someone like me or anybody else that has benefited from organ donation. It’s such a positive thing to do and you’re giving a gift to somebody to get their life going again. Once you’ve done the brilliant thing of registering, I think you then need to have a conversation with your family. It’s a two part thing, there’s the registration and then the conversation with your family.”