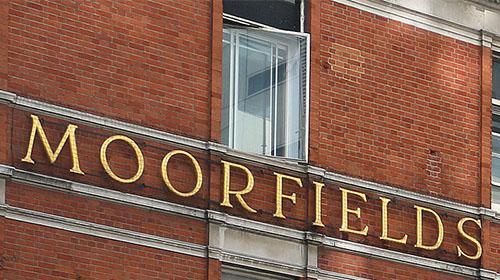 At the beginning of the 19th century, ophthalmology was an unknown science – historically the treatment of eye disease was the domain of itinerant quacks and charlatans.

That all changed in the early 1800s as many soldiers returned from the Napoleonic wars suffering with trachoma.  With the epidemic as an impetus, and coupled with the encouragement of the influential London surgeon Astley Cooper, John Cunningham Saunders founded the first hospital in the world devoted to the treatment of eye disease in October 1804. The original dispensary for Curing Diseases of the Eye and Ear opened at 40, Charterhouse Square in West Smithfield on 25 March 1805.

When the hospital moved in 1822 to a purpose-built building in Lower Moorfields, close to what is now Liverpool Street station, it was renamed the London Ophthalmic Infirmary. The land was cheap and the new infirmary cost only £5,500 to complete.

Although Saunders’ decision to found an institution solely dedicated to eyes was a brave one, he was not the only person in the early 19th century to do so. A few months after Saunders had obtained funding for the dispensary, a similar institution opened in the West End of London.  In 1816, renowned army surgeon George James Guthrie founded the Royal Westminster Ophthalmic Hospital in Mayfair and, in 1843, a third London eye hospital, the Central London Ophthalmic Hospital, was founded by a ‘few zealous gentlemen’ in Bloomsbury.

In 1837 Queen Victoria gave the hospital in Lower Moorfields its Royal Charter.  Although it was renamed the Royal London Ophthalmic Hospital, everyone continued to call it Moorfields.

Although by the mid-nineteenth century the industrial revolution was well under way, its effects on the lives of the common people were far from beneficial. Life was harsh and unremitting and the degree of poverty, squalor and disease in the new industrialised cities was shameful. It was not until the second half of the century that a real explosion of medical science took place.

In 1851, Helmholtz invented the ophthalmoscope, an event that was to transform the study and management of eye disease. That same year, during the Great Exhibition, Albrecht von Graefe from Berlin, Franz Cornelius Donders from Utrecht and William Bowman from Moorfields developed a remarkable friendship.

Bowman made a huge impact on scientific development of ophthalmology, while his colleague and esteemed friend at Moorfields, George Critchett, had a major influence on the progress of surgical method. Von Graefe also inspired many surgical advances, in particular the introduction of surgical treatment for glaucoma, while Donders revolutionised the understanding of optical science.

These developments took place alongside those in other fields, in particular anaesthesia and asepsis.  Both Critchett and Bowman were operating under general anaesthesia using chloroform, while surgeons at Moorfields were, in 1884, the first to use cocaine as a local anaesthetic agent.

It is evident that instruction in ophthalmology was offered to doctors from as early as 1810, many becoming missionaries and spreading the word of Moorfields worldwide. This teaching centred on the use of pathological specimens as much as on the examination of patients.  When, in the latter part of the century, formalin was introduced as a preservative, a major advance in this field, progress in academic ophthalmology gathered pace.

By the 1880s, a combination of better microscopy, recognition of the role played by bacteria in the causation of infection and improved culturing methods, meant that bacteriology had become a science and Moorfields was at the forefront of discovery.

As the 19th century drew to a close, it became apparent that the Lower Moorfields location was too small.  A suitable plot to build a new hospital was found a mile to the north of Liverpool Street, in City Road.  On 28 May 1897, the Prince of Wales laid the foundation stone for the new hospital and two years later the building opened.

The new building included ‘state-of-the-art’ features, including air conditioning and central heating in the outpatient department, an operating theatre designed to encourage asepsis, electric lighting and, most strikingly, an x-ray department.

The introduction of electric current in the operating theatre meant that more powerful electromagnets for particle removal were now available and, combined with newfound accuracy in localisation, this led to a dramatic improvement in surgical results: by 1902, 58% of eyes were saved, compared to 26% in 1895.

Due to the quick succession of the Boer War and then two World Wars in the first half of the 20th century, voluntary contributions to hospitals dropped alarmingly, and Moorfields would have struggled to stay open had it not been for a generous donation from the Prince of Wales’ Hospital Fund during the early 1900s.

It was hardly surprising, given the scale of human conflict, that the first half of the 20th century saw less dramatic progress in medical science compared to the previous 50 years.  However, in 1935, £120,000 was raised by voluntary subscription to build an extension to the building in City Road.

With the forming of the NHS in 1948, the new organisation became a de facto postgraduate teaching hospital.  At the same time, an Institute of Ophthalmology was established under the direction of Sir Stewart Duke Elder, which took over the building in Judd Street previously occupied by the Central London Ophthalmic Hospital, which had moved there from Bloomsbury in 1913.  Patients from that hospital were transferred to one of the two branches of Moorfields – one in the City Road and the other at High Holborn.

The formation of the Institute of Ophthalmology and the appointment in 1963 of Barrie Jones as professor of clinical ophthalmology heralded a revolution in Moorfields’ fortunes. Professor Jones not only invigorated the progress of clinical research, but rapidly introduced the hospital to microsurgery and to the concept of sub-specialisation.  Specialist clinics sprang up overnight and included the virus clinic, the lid clinic, the orbital clinic, and the corneal clinic, all staffed by enthusiastic young doctors keen to develop their unique expertise.

In the late 1960s, Alan Bird, returning from the USA, founded the retinal diagnostic service and introduced the technique of using fluoroscein dye to demonstrate abnormalities in the retina.  This was soon complemented by the use of lasers.   As the 1970s progressed, this revolution in ophthalmology became an explosion.  Whatever the condition, Moorfields had an expert.

In 1978, after the decision to amalgamate the hospital’s two branches at City Road and High Holborn, the redevelopment of the City Road building began.  This was completed 10 years later, with the closure of the High Holborn branch in July 1988.  At this point, all the staff and patients from High Holborn transferred to Moorfields in City Road.  At the same time, the UCL Institute of Ophthalmology moved to a purpose-designed building in Bath Street next to the hospital.

The inauguration of a primary-care clinic in 1986 signalled a major change in clinical strategy and was consolidated by the development of a proactive community outreach policy throughout the 1990s.  Moorfields was now one highly efficient organisation performing 18,000 operations from 80 beds instead of 7,000 from 340.

Moorfields’ pioneering tradition continues. In 2003 we established Moorfields Pharmaceuticals, a specialist manufacturing arm. Following a strategic review the business was sold to the ophthalmic manufacturer Rayner Pharmaceuticals Limited in 2016.

We were one of the first 10 organisations to become an NHS foundation trust in 2004 and we transferred the majority of our services to an ambulatory care model in 2006.  This meant that most patients were now treated as day cases, which although not unusual in ophthalmology internationally, was innovative in the UK.

In 2007, we opened both the world’s largest children’s eye centre adjacent to our main hospital in City Road, and an overseas branch in Dubai.